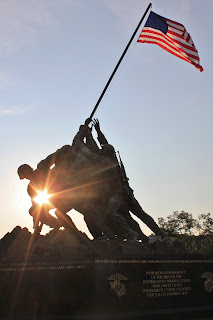 "In honor and in memory of the men of the United States Marine Corps who have given their lives to their country since November 10, 1775"

This massive bronze statue of 32 foot figures and a 60 foot flagpole is modeled after one of the most iconic military photograph in all of American history - Raising the flag over Iwo Jima.  This moment depicts the American victory over the Japanese controlled island after the bloodiest and most fierce battle in the Pacific Theater of World War II by six courageous men of the United States Marine Corps and Navy raising our national colors atop Mount Suribachi.  This memorial was dedicated on November 10th, 1954, by the former General and First Surpreme Allied Commander and then President Dwight D. Eisenhower on the Corps' 179th birthday.  The Marine War Memorial is one of the few places that the American flag flies 24 hours a day, 365 days a year, as a dedication to their service just the same.

"Uncommon Valor Was a Common Virtue." Admiral Chester Nimitz stating in honor of the brave men of the Battle of Iwo Jima.
Posted by t_mork at 5:22 AM